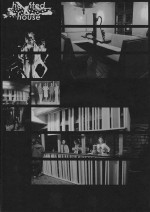 A book of editions, a series of prints, intended to be rasterized into one massive image, with an accompanying guide for its construction.  This book accompanied Gallows' contributor et al.'s installation of the Haunted House itself in Frankfurt.

"On three nights, from the 28th to the 30th of October the artist group et al.* presented the Haunted House in Frankfurt am Main. There were a little over 60 artists and crew involved. The range of skill went from lighting design to costume design to make-up and carpentry. Eighteen artists performing in 20 rooms that guests to the house walked through. Additionally each night there were invited performers: Vaginal Davis (Berlin), Jean-Louis Costes(Paris), Bradley Eros(New York) who performed on a constructed stage in the "chapel" of the house. They would mark the opening of the evening and were themed accordingly.

FUCK THAT said the spooks."