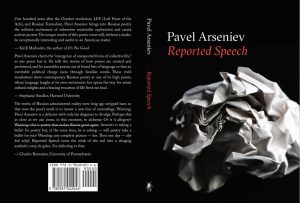 Reported Speech, a bi-lingual edition of Pavel Arseniev’s (Saint Petersburg) poetry with an introduction by Kevin M.F. Platt (University of Pennsylvania) will be released this fall.  Pre-order here: http://www.cicadapress.net/products-page/

Arseniev’s poetry provides a living link between the legacy of the 1920s Soviet avant-garde art­ and theory, on the one hand, and the modern Western materialist thought on the other. It traces how these influences become weaponized in the language of contemporary Russian protest culture. Arseniev readily politicizes all, even the most mundane facts of the poet’s life, while approaching reified bits of found speech and propaganda with lithe, at times corrosive irony and lyricism.

Kirill Medvedev, the author of It’s No Good:

One hundred years after October revolution, LEF (Left Front of the Arts), and Russian Formalism, Pavel Arseniev brings into Russian poetry the militant excitement of subversive materialist exploration and canny activist protest. The unique results of this poetic event will, without a doubt, be exceptionally interesting and useful to an American reader.

Pavel Arseniev charts the “emergence of unexpected forms of collective life,” as one poem has it. He tells the stories of how poems are created and performed, and he assembles poems out of found bits of language so that an inevitable political charge races through familiar words. These vivid translations show contemporary Russian poetry at one of its high points, where language laughs at its own seriousness but opens the way for astute cultural insights and a bracing evocation of life lived out loud.

The truths of Russian administered reality were long ago stripped bare, so that now the poet’s work is to invent a new line of camouflage. Warning: Pavel Arseniev is a defector with only his disguises to divulge. Perhaps this as close as we can come, in this moment, to alchemy. Or is it allegory? Arseniev is taking a bullet for poetry but, at the same time, he is asking – will poetry take a bullet for you? Warning: any complete picture – lies. Then one day dyr bul schyl. Reported Speech turns the stink of the real into a stinging aesthetic coup de grace. I’m defecting to that. 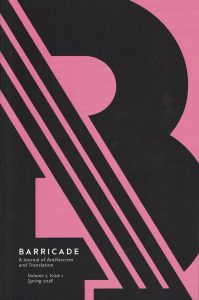 Cicada Press is excited to announce the upcoming release of the first volume of Barricade: A Journal of Antifascism & Translation.  On sale May 12th, 2018, look out for a release party at Verso Books with details TBA.  Published in collaboration with the NYU Department of Comparative Literature.

Barricade: A Journal of Antifascism & Translation is a new, biannual print and open-access periodical dedicated to publishing translations of linguistically and temporally diverse works of antifascist and antiauthoritarian literature, including but not limited to short stories, poetry, theater, nonfiction, philosophical/theoretical writing, and excerpts of longer works.

Barricade is a platform for the publication of writing against fascism and authoritarianism and other forms of domination and control.

We believe that power functions in part by controlling the movement of information.

We seek to keep information moving by re-presenting it in translation.

We believe that power functions in part by establishing the illusion of transparency.

We believe that literature and its translation obstruct that illusion.

Barricade seeks translations of literary and theoretical writing against the unequivocality of power, in its many historically, politically, linguistically specific forms.

A barricade is a makeshift form of opposition.

A barricade shows its seams and outlines. 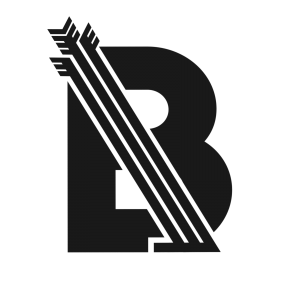 Barricade is an open access journal which means that all content is freely available without charge to the user or their institution. Users are allowed to read, download, copy, distribute, print, search, or link to the full texts of the articles, or use them for any other lawful purpose, without asking prior permission from the publisher or the author.